In the eleventh chapter of Zechariah, there are five shepherds mentioned.

The first shepherd is the Lord Jesus Christ who fed Israel during His ministry among them.  Israel is termed a ‘flock for slaughter,’ because its national leaders would reject Him, resulting in the nation of Israel’s slaughter by the Roman army under General Titus. In particular, Jesus blessed the poor of the flock with His teachings and demonstrations of miraculous powers. His grace brought salvation to sinners, and His unity brought harmony between people from diverse social backgrounds. He fed the flock with grace and truth (grace and truth came through Jesus Christ. John 1:17). 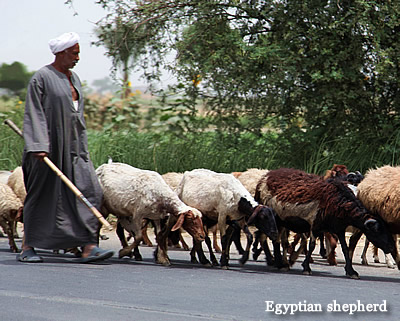 Israel’s religious leaders are here termed, shepherds. The Herodians (political party), Sadducces (liberal party), and Pharisees (conservative party ) disliked each other, but they could agree in their hatred of Jesus. At the end of Jesus’ ministry, these three shepherds sought to trap Jesus with their questions. In Matthew 22, we have the account where Jesus faced all three and answered all three of them. Afterwards,  in Chapter 23, He expressed His loathing of them.

I dismissed the three shepherds in one month. My soul loathed them, and their soul also abhorred me. Zechariah 11:8

And they sent to Him their disciples with the Herodians, saying, “Teacher, we know that You are true, and teach the way of God in truth; nor do You care about anyone, for You do not regard the person of men. Tell us, therefore, what do You think? Is it lawful to pay taxes to Caesar, or not?” Matthew 22:16-17

The same day the Sadducees, who say there is no resurrection, came to Him and asked Him, Matthew 22:23

But when the Pharisees heard that He had silenced the Sadducees, they gathered together. Then one of them, a lawyer, asked Him a question, testing Him, and saying, Matthew 22:34-35

The prophecy of Zechariah continues and gives the exact amont of silver that Judas was paid to betray Jesus.

Then I said to them, “If it is agreeable to you, give me my wages; and if not, refrain.” So they weighed out for my wages thirty pieces of silver. Zechariah 11:12

Finally, Zechariah prophesied about a foolish and worthless shepherd who will be a future leader of Israel. Because Israel rejected their true Shepherd, they will be deceived and follow the Anti-Christ who is yet to appear according to many biblical prophecies.

And the Lord said to me, “Next, take for yourself the implements of a foolish shepherd.  For indeed I will raise up a shepherd in the land who will not care for those who are cut off, nor seek the young, nor heal those that are broken, nor feed those that still stand. But he will eat the flesh of the fat and tear their hooves in pieces.

“Woe to the worthless shepherd,
Who leaves the flock!
A sword shall be against his arm
And against his right eye;
His arm shall completely wither,
And his right eye shall be totally blinded.” Zechariah 11:15-17

These following verses from various scriptures describe the coming Anti-Christ. The God of his fathers refers to the Almighty God of the Old Testament while the desire of women refers to Israel’s promised Messiah who would be born of a woman. It was the desire of a woman to have the priviledge to give birth to the Messiah who would deliver Israel from their oppressors.

“Then the king shall do according to his own will: he shall exalt and magnify himself above every god, shall speak blasphemies against the God of gods, and shall prosper till the wrath has been accomplished; for what has been determined shall be done. He shall regard neither the God of his fathers nor the desire of women, nor regard any god; for he shall exalt himself above them all. Daniel 11:36-37.

He will oppose and will exalt himself over everything that is called God or is worshiped, so that he sets himself up in God’s temple, proclaiming himself to be God. 2 Thessalonians 2: 4

Who is a liar but he who denies that Jesus is the Christ? He is antichrist who denies the Father and the Son. 1 John 2:22.

Then I saw another beast coming up out of the earth, and he had two horns like a lamb and spoke like a dragon. Revelation 13:11