… an eternal gospel to proclaim to those who dwell on earth … Revelation 14:6

“The God who made the world and everything in it is the Lord of heaven and earth … we should not think that the divine being is like gold or silver or stone … now he commands all people everywhere to repent. For he has set a day when he will judge the world with justice …” Acts 17:24-31 — Words Paul spoke to the pagan Greek philosophers 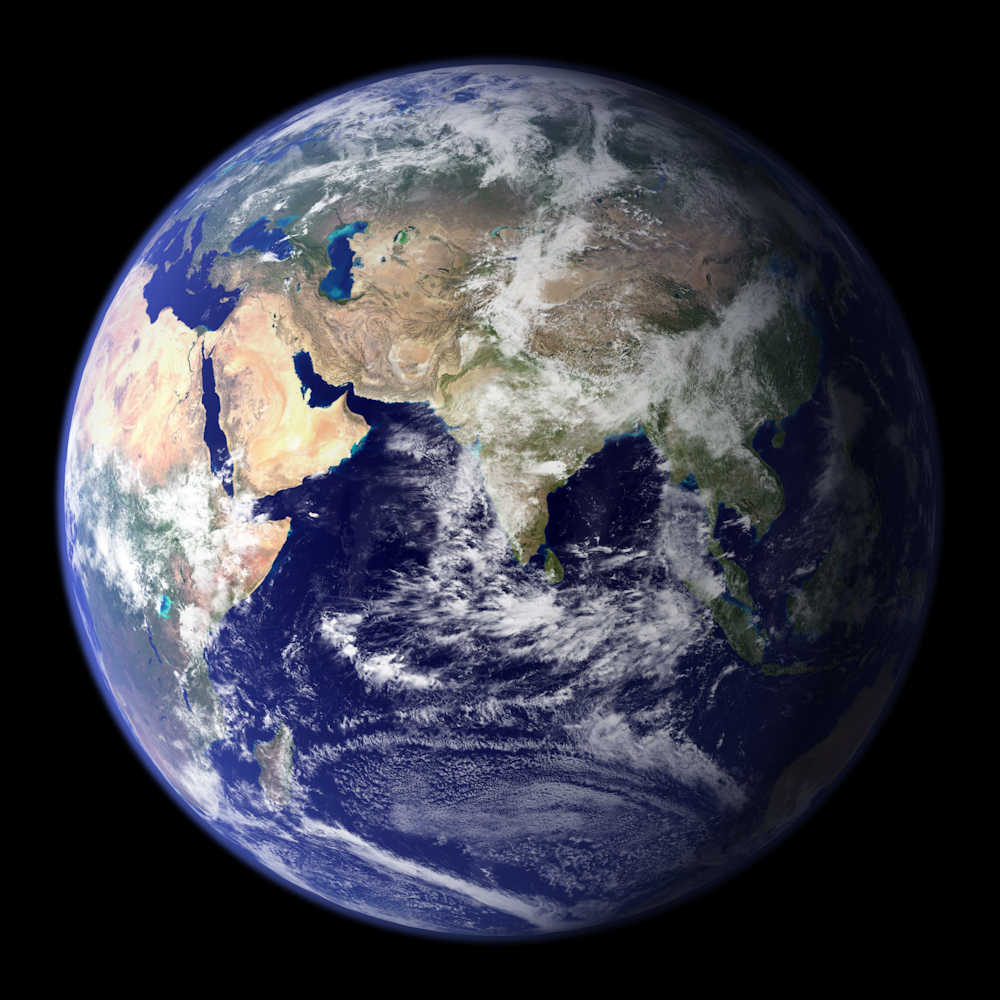 The book of Revelation mentions a gospel that is often overlooked. It is not the familiar gospel of salvation, where, in unmerited grace, a person is offered the forgiveness of sins through faith in the sacrificial death of Christ upon the cross. The gospel in Revelation 14 is called the eternal or everlasting gospel, because it summons humankind to worship the Creator and to fear Him because He is the Supreme Judge of the world.

It is an eternal gospel, because the evidence for an infinitely powerful Creator can be seen from the existence and design of the universe that has testified to everyone since the beginning of time. It is a gospel that pre-dates the Savior’s death upon the cross and applies to everyone, even those who have never heard the gospel of salvation. . Without the knowledge of Christ, the human race has either honored the Creator as supreme or honored something else as supreme, which is idolatry.

Then I saw another angel flying directly overhead, with an eternal gospel to proclaim to those who dwell on earth, to every nation and tribe and language and people. And he said with a loud voice, “Fear God and give him glory, because the hour of his judgment has come, and worship him who made heaven and earth, the sea and the springs of water.” Revelation 14:6-7 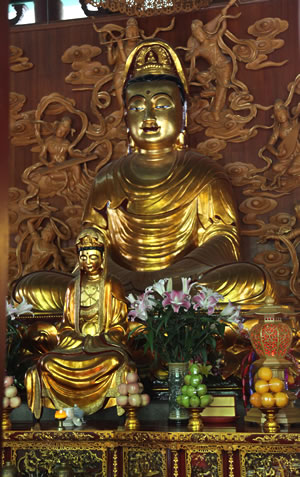 Although they claimed to be wise, they became fools and exchanged the glory of the immortal God for images [idols] made to look like a mortal human being and birds and animals and reptiles. Romans 1:22-23

The eternal gospel is good news, because it frees us from the claims of anyone who would assume unlimited power over us as if they were divine. The only ultimate authority in our lives should be God who deserves our reverence and worship. Many of the Pharaohs of ancient Egypt claimed they were gods, and they made sure the common people would treat them as such..

“Fear God and give him glory,… and worship him… Revelation 14:7

Often a Caesar would claim to be a divine son. For example, next to the Celsus library in Ephesus is an archway with the inscription, “IMP CAESRI DIVI F AVGVSTO PONTIFICI MAXIMO,” meaning, Emperor Caesar divine son Augustus High Priest. In the inscription, the letters DIVI F stands for Divi Filius or Divine Son. Octavian was deified by the Roman Senate after the defeat of Mark Antony and Cleopatra in 27 BC. 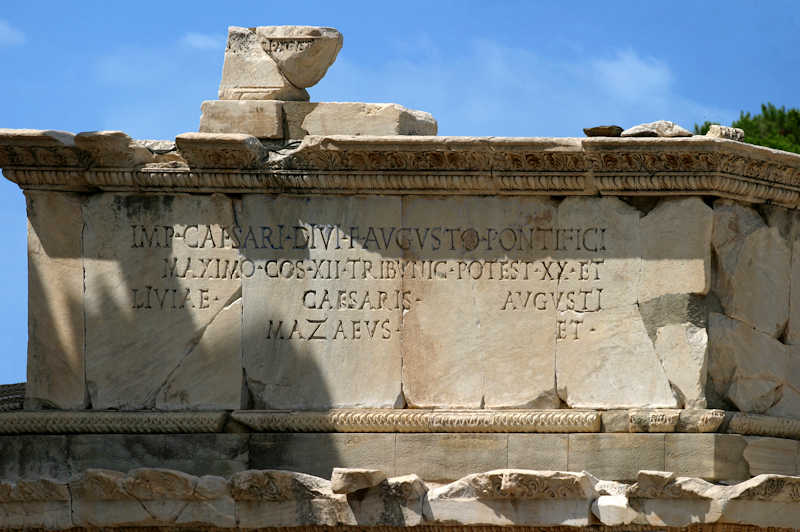 The first of the Ten Commandments instructed the children of Israel that they were to have no gods beside the one true God. Israel could look back to Egypt and remember the time they suffered under the Pharaohs who presented themselves as divine. Worshipping the one true God brings freedom from the slavery of power-ambitious leaders.

“I am the Lord your God, who brought you out of Egypt, out of the land of slavery. “You shall have no other gods before me. Exodus 20: 2-3

Furthermore, the first commandment of the Decalogue is a first principle of natural law. It teaches us that God is supreme and should have our exclusive devotion. This natural law principle is found in the United States’ Declaration of Independence when it appeals to the Laws of Nature and of Nature’s God. The appeal is not to some human authority. It enforces the point by appealing to the Supreme Judge of the world who is the ultimate source of law, liberty, equality, and justice. Again, the motto over the entrance to Langdell Hall of the Harvard Law School makes the same point. NON SVB HOMINE SED SVB DEO ET LEGE is a Latin phrase meaning, NOT UNDER MAN BUT UNDER GOD AND LAW. God is supreme, and no human leader should ever usurp ultimate authority and power as if he himself were God.

The Eternal Gospel is proclaimed to everyone, because everyone is responsible to know God’s eternal power and His divine attributes from the the evidence of the world around us. No one falls outside of accountablity to the Supreme Being who brought the entire universe into existence. Hence, the Eternal gospel is a gospel to all.

…to every nation and tribe and language and people… Revelation 4:7

For since the creation of the world God’s invisible qualities—his eternal power and divine nature—have been clearly seen, being understood from what has been made, so that people are without excuse. Romans 1:20

The heavens declare the glory of God;
the skies proclaim the work of his hands.
Day after day they pour forth speech;
night after night they reveal knowledge.
They have no speech, they use no words;
no sound is heard from them.
Yet their voice goes out into all the earth,
their words to the ends of the world.
In the heavens God has pitched a tent for the sun.
Psalms 19:14

The Eternal Gospel proclaims there is a Creator God. The evidence for the truth of this proclamation is the design and existence of everything around us, such as the productive plants, amazing animals and the vast oceans and beautiful mountains. Basically, the justification for their existence has been either a Creator or some form of spontaneous generation (today it’s called evolution). Louis Pasteur (1822-1895) showed that life does not arise from non-life with his swan-neck flask experiments.

… him who made heaven and earth, the sea and the springs of water.

The main reason Darwinian evolution is so militant is that it is intellectually opposed to the truth of a Creator God. Evolution provides an impersonal, non-moral creator that can judge no one. This is a very comfortable god that sinners can just as easily admire as they can simply ignore.

The Eternal Gospel warns all of us that we will be judged by God for everything we have done in our life. In other words, our ultimate responsibility is to God Almighty not some political leader. If a government were to issue a decree that required disobedience to God, we must obey God instead of a human law or judge. In Acts 4:19, Luke records that Peter and John chose to obey God rather than rulers and elders of Israel.

…the hour of his judgment has come…
Revelation 14:7

Now all has been heard;
here is the conclusion of the matter:
Fear God and keep his commandments,
for this is the duty of all mankind.
For God will bring every deed into judgment,
including every hidden thing,
whether it is good or evil.
Ecclesiastes 12:13-14

… each person was judged according to what he had done.
Revelation 20: 13

All inhabitants of the earth will worship the beast… Revelation 13:8

This feared personage is also mentioned in the second epistle to the Thessalonians. Audaciously, he sets himself up as if he were God. Perhaps, the economic and social conditions of the future will become so bad that the population will gladly yield to him unlimited power, including control over all economy activity.

He will oppose and will exalt himself over everything that is called God or is worshiped, so that he sets himself up in God’s temple, proclaiming himself to be God. 2 Thessalonians 2:4

It also forced all people, great and small, rich and poor, free and slave, to receive a mark on their right hands or on their foreheads, so that they could not buy or sell unless they had the mark, which is the name of the beast or the number of its name. Revelation 13:16-17. 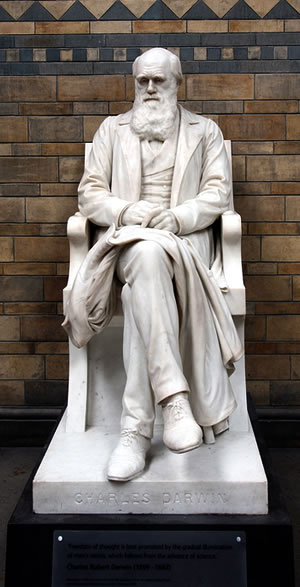 To understand this human desire to be like God, we must go back to the first book of the Bible, the book of Genesis.

The first enticement to sin in human history occurred in the Garden of Eden. Where the serpent promised Eve that, upon eating the forbidden fruit, she would become like God. The serpent offered becoming like God as if it would be an amazing benefit to her, so she partook of the fruit. Satan’s end was achieved, and she sinned in disobeying God and joining the rebellion of Satan against God. As a result, humankind fell from innocence, and death became their end. Since then, humankind has replaced the one true God with various types of idols both metal and mental to exclude the true God from their minds and hearts.

“You will not surely die,” the serpent said to the woman. “For God knows that when you eat of it your eyes will be opened, and you will be like God, knowing good and evil.” Genesis 3:4-5

The tragedy of humankind is that we like to live our lives as if we were the masters of our own destinies without being accountable to anything or anyone. So the question is, Do we pray to God each day to guide us according to His will and plan? Do we study God’s plan for us as it is detailed in His written word, the Bible? Or, do we live our lives independent of God’s will and His instructions for us? Do we ignore God as if He did not matter to us? We need to remember that we are mere creatures who must give an account of our lives to the Supreme Judge of the universe. We will be judged according to the revelation that He has given to us in His creation, the moral law written on our hearts, and His Holy Scripture. So, the question remains. Who is going to be God in your life? What is your answer?