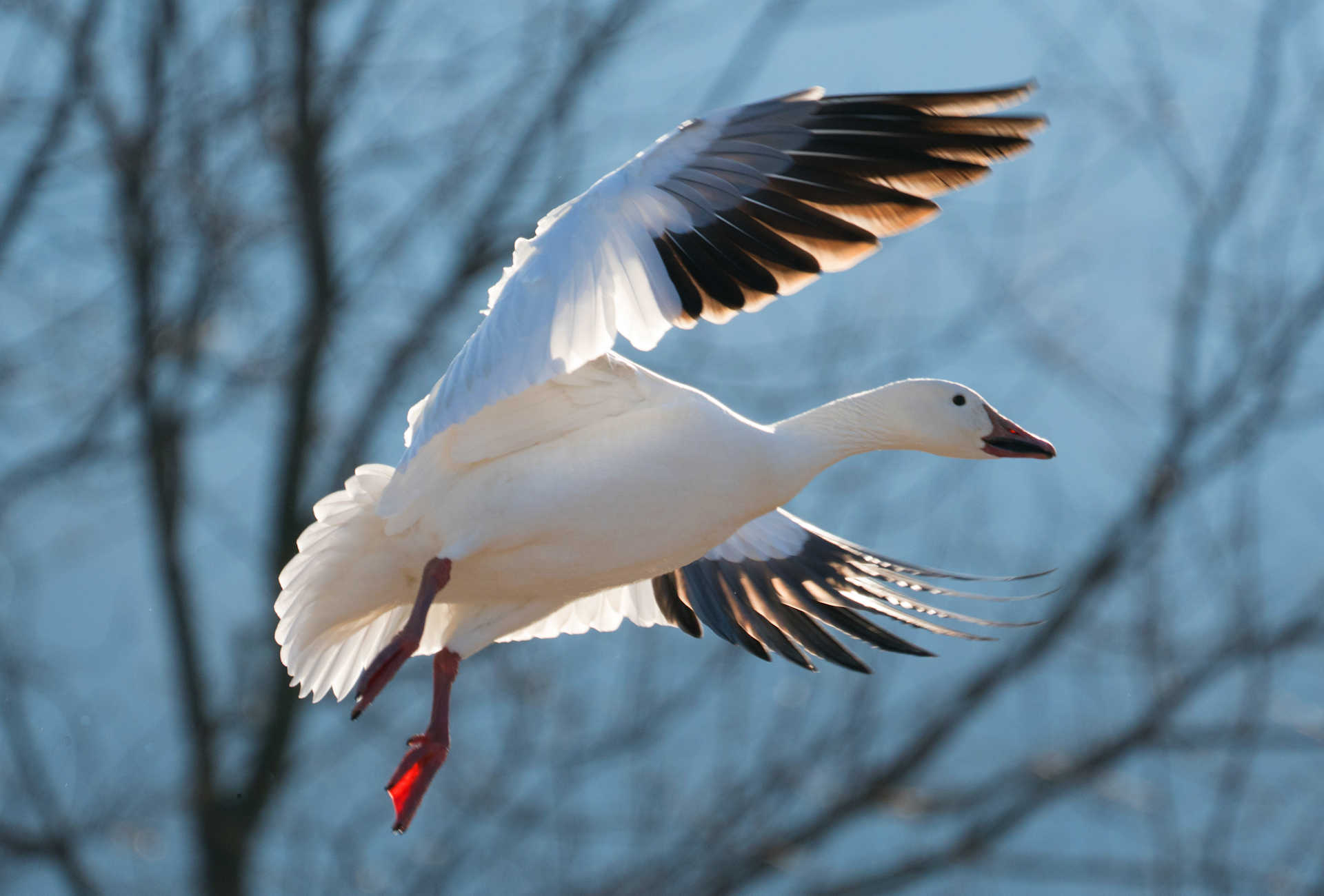 As soon as the big yellow school bus rumbled into the yard where it always stayed for the night, Randy hopped down the steps and rushed into the house to change his school clothes. No loitering this time. Pretty soon he was ready and back outdoors again, running in the direction of the road. On he ran, peering down into the ditches on either side. He was looking for something he had spotted on the way home.

Down in the culvert a big fine snow goose was painfully making its way through the dried tumbleweeds and loose rocks. Hunters had shot and wounded it in the wing. It had floundered awkwardly to the ground, calling in distress to its mate and friends who were on their way south for the winter. Frightened by the gunfire they flew on, leaving him helplessly alone.

A shadow, then a dark figure bore down on him as he waddled along dragging his injured wing. He struggled in vain as Randy’s strong hands pinned him down and then lifted him gently in his arms and carried him home.

He locked the goose up in the vacant brooder house and put fresh water and mash and wheat before it. For weeks he cared for it, and turned it outside into an open pen for fresh air each day. Sometimes he sprayed it with fine mist from the hose. This was what Dudley, as he was nicknamed, specially liked.

By this time Randy was quite attached to his pet and he phoned to the game warden to see if he could possibly locate a mate for it so it wouldn’t be so lonely. But it was a snow goose that spent the summers in Canada and flew south for winter, so there were no others to be had.

One day Randy left the gate unhooked while he was putting down wheat for Dudley, and it swung open. When he turned the goose was gone. Dudley walked out the gate and down to the water trough. He fluttered his wings and found they could work pretty well, for the wound was healing nicely by now. After a little investigating he walked back to his pen and looked at Randy, who was delighted to see he wasn’t trying to escape. 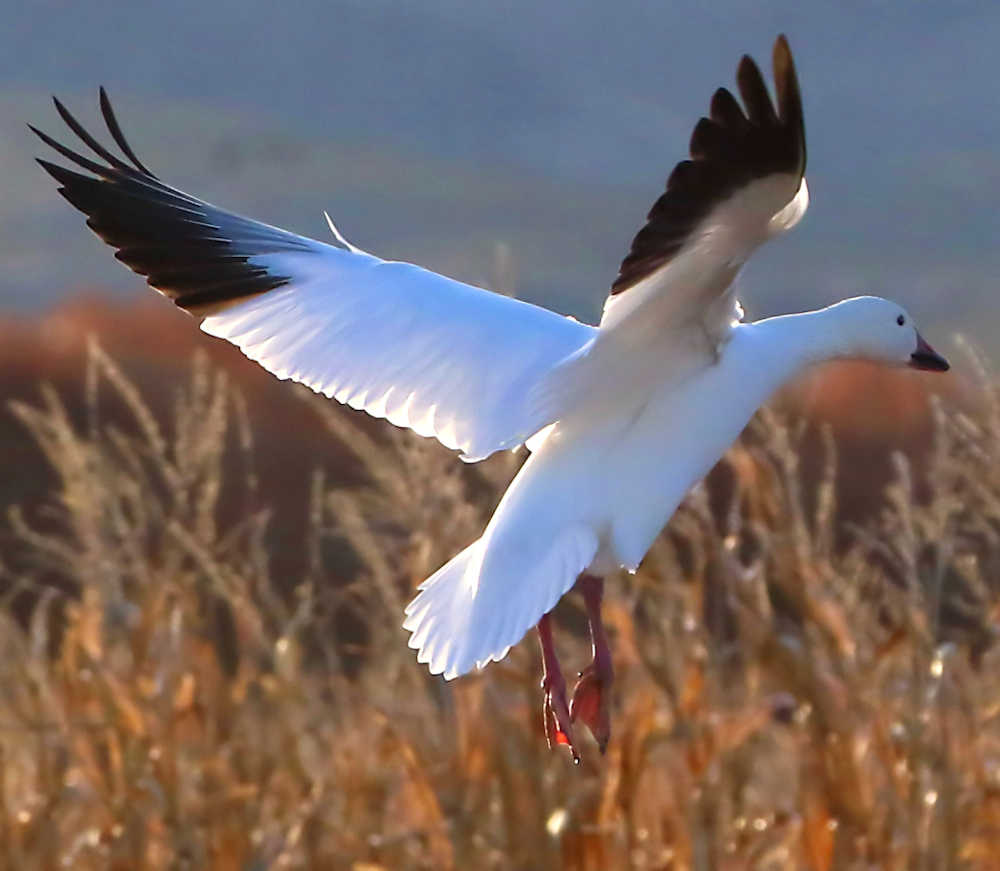 Have you known what it is to be lost? Have you known what it is to be without strength? Well then, consider yourself for a moment like Dudley, traveling toward your destiny — but stricken by sin which will not allow you to enter into God’s holy presence. Yes, you too are stricken and just as unable to lift yourself out of your fallen condition as he was. And you will be left behind when the Lord comes, if mother and father and sisters and brothers are saved and you are not.

“When we were yet without strength, in due time Christ died for the ungodly.” Romans 5:6. Here then is the Saviour, the only One who is able to help poor perishing sinners. And He is willing. He is loving. He proved His love by bearing all the punishment for all who will believe, from God’s own hand on the cross of Calvary. “With His stripes we are healed.” Isaiah 53:5.

Dudley walked back into his pen with a “Quack, quack, quack.” But after this the gate was not locked, so he could come and go as he pleased.

Dudley was well fed and cared for, and was such a friendly, social pet, yet he was unmistakably lonely. He seemed to be watching and waiting for something. All winter long he patiently waited, though it was evident he could fly if he wished.

Spring arrived early this year, and with the warmer weather came flocks of birds. Early one morning high overhead we heard “Honk, honk, honk.” Guess what it was! Dudley heard it too—he was last seen flying over the housetop, and away.

Are you watching and waiting for something too? Are you ready? A dear old white haired grandpa was waiting and listening for something, even though he was stone deaf. He did not worry that he might not hear it, for he knew it would wake even the dead in Christ, and he always said, “The first sound I’ll ever hear will be the shout in the air.” Yes, he waited to hear the voice of his precious Saviour Who is soon coming to call us who belong to Him to His bright home above. Are you one of His redeemed ones who will hear His voice saying,

Snowy white wings reflected the early streaks of dawn as a flock of Canadian Snow Geese continued their long flight north. Unerringly they flew the blue sky in just the right direction.

Snow was shining on the upper slopes of the mountains and the little town below was still asleep. A few miles farther, and one of the geese broke formation by circling low over a quiet farm yard and houses. It flew to the water trough and began to splash and quack loudly. Such a commotion. It woke some of the sleeping household. Drowsily they wondered what was going on. “Quack, Quack!” He waddled about honking as if to ask “Is anyone home?”

He had not forgotten Randy and wanted to say, “Thanks again.” He circled the farm several times calling, calling . . . and then with a farewell note he flew swiftly to catch up with the rest.

Later at the breakfast table mother asked, “Did you hear our visitor this morning so early? Could it be that Dudley still stops in to pay his respects?”

Father said, “Well they have been proven to live many years and they have a deep sense of love and loyalty so it could very well be.” Nearly every fall and spring someone has heard the call of Dudley sounding a note of thanks which warms the hearts of the little family in the farmhouse where the Snow Goose was once taken care of.

Let us never forget to thank the One Who came down right where we were, lost and helpless and rescued us in spite of our resistance to His love.

“HE WAS WOUNDED FOR OUR TRANSGRESSIONS,
HE WAS BRUISED FOR OUR INIQUITIES:
THE CHASTISEMENT OF OUR PEACE WAS UPON HIM;
AND WITH HIS STRIPES WE ARE HEALED.”
Isaiah 53:5.

The Bible tells us that the Lord Jesus sees even a little sparrow that falls to the ground. If the Saviour looks down and sees each little sparrow, let us remember how much He loves each and every boy and girl.

“ARE NOT TWO SPARROWS SOLD FOR A FARTHING?
AND ONE OF THEM SHALL NOT FALL ON THE GROUND WITHOUT YOUR FATHER.
FEAR YE NOT THEREFORE,
YE ARE OF MORE VALUE THAN MANY SPARROWS.”
Matthew 10:29, 31.